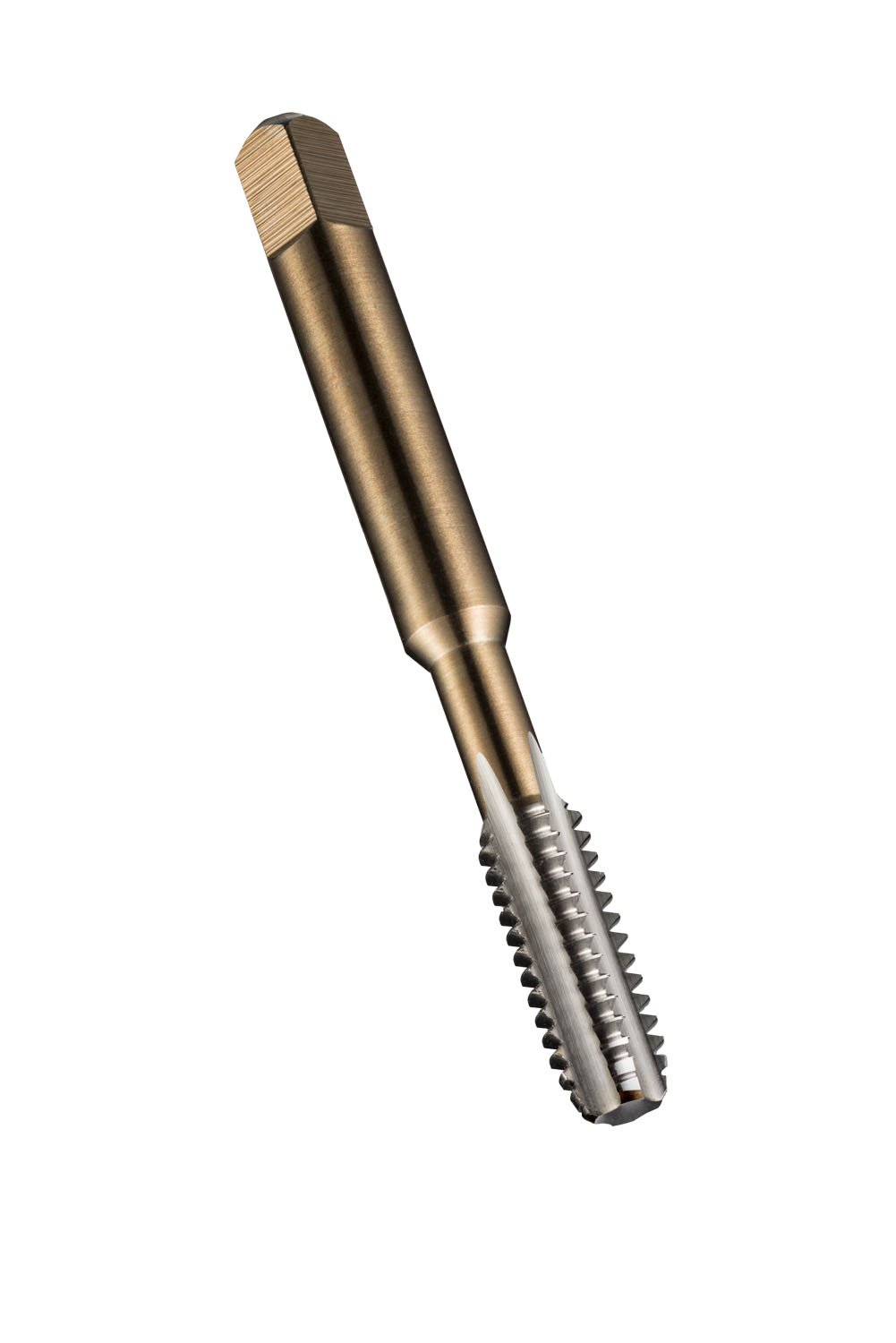 The Dormer E500/E513 uncoated, high-speed steel two-piece hand threading tap set (including plug and bottoming chamfers) has straight flutes and round shanks with square ends, and is used to create metric right-hand threads in a range of materials. It is available in two different thread specification standards: Metric Coarse (M) or (Metric Fine (MF). The straight flutes are suitable for threading through holes (extending through the workpiece) and blind or bottoming holes (with only one opening).

Right-hand threads are designed to tighten when the head or nut is rotated clockwise (the most common threading direction). High-speed steel (HSS) is a common general-purpose steel for cutting tools and is compatible with a variety of materials. With no coating or surface treatment, this uncoated tool can be used on a broad range of materials and provides an economical alternative to coated tools. The round shank with square end makes it suitable for hand or power-driven applications. This tool can be used in machines, such as drill presses or lathes, or with hand tools such as tap wrenches.

Taps produce internal threads in previously formed holes and can be used in machines (such as drill presses) or with hand tools. Common types of taps include hand taps, spiral point taps, spiral flute taps, thread forming taps, and pipe taps. Hand taps (straight-flute taps) collect chips in the straight flutes of the tool; spiral point taps push chips through holes ahead of the tool; and spiral flute taps pull chips back from the tip of the tool, up and out the hole. Thread forming taps, also known as cold forming taps, press rather than cut to create threads in a drilled hole, and no chips are created. Pipe taps create threads in pipes and pipe fittings. Each thread type designates a thread profile and each type is identified with an abbreviation. In the U.S. and Canada, the Unified Thread Standard is the dominant thread type, including UNC (Unified Coarse), UNF (Unified Fine), and NPT (National Pipe Taper) threads, among others.

The WHO is needed more than ever, but is held back by lack of funds and a structure that leaves it vulnerable to politics, writes Anthony Costello

∙Read our latest coverage of the covid-19 pandemic
What did the spending review do for population health?

The government’s spending review missed the chance to lay out an integrated plan to improve population health, argues this Editorial

editorial  |  Nov 8
What did the spending review do for population health?

The government’s spending review missed the chance to lay out an integrated plan to improve population health, argues this Editorial

Over 28 million more years of life were lost than expected in 2020 in 31 upper-middle and high-income countries, finds new research

Over 28 million more years of life were lost than expected in 2020 in 31 upper-middle and high-income countries, finds new research

Whole genome sequencing is a useful diagnostic test in patients with suspected mitochondrial disorders, according to this study

Whole genome sequencing is a useful diagnostic test in patients with suspected mitochondrial disorders, according to this study

COP26 diary: making health central to tackling climate change
Covid-19 and ethnicity: we must seek to understand the drivers of higher transmission
Underfunded mental healthcare in the NHS: the cycle of preventable distress continues
Covid 19: A strong pandemic response relies on good data
MPs not wearing mask was bad enough, but their defence of this position is even worse
David Oliver: Should single rooms be the default for NHS inpatients?
Covid-19 vaccination should be mandatory for healthcare workers
Building the future medical workforce: helping students choose psychiatry

Obstructive sleep apnoea/hypopnoea syndrome and obesity hyperventilation syndrome in over 16s: summary of NICE guidance
Even low doses of steroids increase the risk of cardiovascular disease in people with inflammatory diseases
Home based rehabilitation after a knee replacement is as effective as physiotherapy
Providing effective evidence based support for breastfeeding women in primary care
Loneliness is strongly linked to depression among older adults, a long term study suggests
GPs may help people at risk of self-harm by asking open questions and acknowledging distress
Women with kidney disease can be given a personal risk assessment for pregnancy
NIHR Alerts aim to help busy health and care professionals put research into practice

Priority setting and net zero healthcare: how much health can a tonne of carbon buy?

Covid-19: global vaccine production is a mess and shortages are down to more than just hoarding

Vaccination efforts around the world are being restrained by a shortage of doses. Jane Feinmann looks at what is holding up the process

Covid-19 treatments and vaccines must be evaluated in pregnancy

Pregnant women should be included in drug and vaccine development from the outset, argues this Editorial

Columbia Mens Firwood JacketPast issues
Under-reporting of deaths limits our understanding of true burden of covid-19
analysis  |  Oct 12
Are vaccine passports and covid passes a valid alternative to lockdown?
head to head  |  Nov 3
How can I cope with my periods on a long shift?
careers  |  Nov 1
Routine antenatal care for women and their babies: summary of NICE guidance
practice  |  Oct 29

What are your thoughts?